How Do I Show Clients the Impact of the SECURE Act?

Use Income InSight to help clients see the value of opportunities created by the SECURE Act.

The Setting Every Community Up for Retirement Enhancement Act (SECURE Act) rolled out significant changes for retirees.

You can use Income InSight to model these opportunities. Enter some basic information into the software:

The base case will show you how most people enter retirement; taking Social Security as soon as possible and using non-qualified money to support and supplement their income. They use IRA money when they have Required Minimum Distributions or because they ran out of non-qualified money.

This example shows a client who has accumulated assets over time and they're not spending them. Their portfolio is likely to continue to grow even though they're drawing their required income need from it each year.

The green bars below represent the net spendable amount. The red bars are federal income tax. And the blue line represents the client's desired income. In this example, the client starts out at $90,000 and increases each year by 2.6% inflation. Those are the assumptions that underlie this chart.

For the first seven years of John and Jane’s retirement are not paying any federal income tax. When John reaches 72, he has to start withdrawing from IRAs. They start paying some federal income tax, but it doesn’t force them over what they need to spend. However, when Jane also reaches age 72, they start to see excess RMDs (represented by the green bars above the blue line). This shows that there is more after-tax spendable income than needed. Notice the tax (red bars) increases once those excess RMDs start to appear. 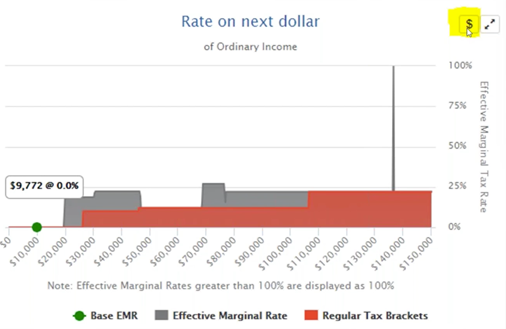 The graph above is a Tax Map. The ordinary income tax brackets are represented in red. In our example, our clients are both over 65. You can see on the Tax Map that they could take $27,400 of ordinary income before paying any federal income tax. Withdrawals beyond $27,400 will be taxed in the 10% bracket. Income InSight looks for the interactions between the different income types. John and Jane have some non-qualified accounts that are generating long-term capital gains. They have some Social Security. So, they actually start to pay federal income tax once they reach about $19,000 of IRA withdrawals. Now, because they were spending from the non-qualified account, they actually have a big gap where they could continue to harvest more without paying any federal income tax.

The Tax Map helps advisors identify opportunities for clients, like getting more money out of their IRA without paying any federal income tax. The gray identifies the marginal tax rate, where each additional dollar withdrawn from the IRA creates a tax on the IRA dollar but also brings 85 cents of a Social Security dollar in as taxable ordinary income. Once a full 85% of the Social Security benefit becomes taxable – around $47,000 in the chart above, then you see another gap before capital gains start to become taxable. Those are the opportunities you want to pay attention to.

Click on the dollar sign highlighted above to bring up the details and move into Tax Clarity to dig a little deeper.

Take notice of the tax inefficiency in the approach most people would take, particularly in light of the new RMD age. This represents an opportunity to change the harvesting pattern to try to combat excess RMDs. There are a couple of different ways you can do that in Income InSight.

In the example, the clients need their portfolio to last 33 years. In both the example base case and a plan in which they harvest their IRA money first, it does. One hundred percent of the income need is met and John and Jane are leaving a million dollars to the people and causes they care about. In fact, they're okay even if they get a down market early in retirement, either of them die, or they have a long-term care need. So, they're fine across the board, but there is still a big opportunity here.

Drawing down IRA money early in retirement will bring down the balances and the RMD. By harvesting from the IRAs early on in retirement, the example clients are able to increase their estate value by roughly $80,000, simply by spreading out the tax liability over the course of the client's lifetime and eliminating the excess RMDs.

Another option is to do a Roth conversion. The SECURE Act makes the conversation around Roth conversions even more important, particularly as there's more debate about the Tax Cut and Jobs Act sunset.

In this example case, Roth conversions end up providing an even better result than harvesting IRAs first.

These are the Roth conversions that are generated by Income InSight. The amount increases each year because there are bracket inflations as the tax brackets go up each year. Additionally, our example clients are spending from non-qualified money to support lifestyle needs in the meantime, which means that the bond portion of their investment allocation inside those accounts is throwing off less interest. This means there is more room for Roth conversion dollars because they are taxed at ordinary income rates.

Roth IRAs don't have RMDs during the owners lifetime. So, when you do a Roth conversion, that money is allowed to compound over the rest of the client's lifetime, and the majority of the assets that are left behind to the beneficiaries are Roth IRA assets. Now, in this example case, with a beneficiary tax rate where it is, leaving behind Roth assets can be really beneficial.

Identify low earning years to spread the impact and avoid the highest bracket. In the example, we assume that there's a $500,000 inherited IRA. If the example clients do what most people would do in the absence of advice, they would defer for 10 years and take a lump sum in 2030. The projected tax bill in 2030 is $270,000 because of the $500,000 inheritance, plus their own incomes. Their lifetime tax bill over their overall retirement is $816,000.

In the Income InSight Income by Result chart below, you can see that 10 years out, there's a big spike where our example clients are forced to liquidate their entire IRA. The large, red portion of that bar represents taxes at higher rates. In this chart, you'll see the example clients had $899,000 of income that they couldn't avoid which puts them in a 37% bracket. They're getting high Medicare premiums. They have an additional 10 years of deferral and that compounded on itself, but it is not a better result than an alternative method for distribution.

Here’s an example of how an advisor might recommend spreading out the tax liability.  John claims Social Security at age 70. He has a five-year window where he has flexibility. He can either drawn down his IRA, draw down the inherited IRA, or live off the non-qualified money.

Show the Impact of a Five-Year SPIA

Using current SPIA rates from Schwab's annuity SPIA tool, the estate value is significantly higher: $120,000 in present value. Even with the low internal rate of return of the five-year SPIA, the lifetime tax bill is reduced from $816,000 to $777,000. It’s not a huge tax savings in present value, but significant, nonetheless.

There is tax associated with the annuity over the first five years of distribution. The next two years present some opportunities for Roth conversions because Social Security doesn't kick in for this client until the next year. You’ll start seeing RMDs shortly after. That five-year distribution during low years makes a significant impact.