Most of you are probably already familiar with a simplified version of the widow calculation which says that the surviving spouse receives the higher of his or her own benefit, or the benefit of the deceased, which may have been reduced or increased depending on if and when the deceased filed for Social Security benefits. See Figure 1 below.

But there are several layers of complexity to the Widow(er) Benefit that make it difficult to determine whether to claim Widow(er) Benefits early, when to wait, and when to switch to the survivor’s own benefit when conducting Social Security planning. There are actuarial reductions for the widow who claims early and a Widow Limit, which we’ll get into in a moment. The good news is Social Security Timing® includes a Widow Calculation so you can run scenarios for your widowed clients and help them determine when to claim benefits.

Get started now with a FREE trial of Social Security Timing!

Now let’s get into some of the complications you’ll be dealing with when advising a widowed spouse on when to elect Social Security benefits.

There are 3 main complicating factors when dealing with the Social Security Widow Benefit:

Let’s look at an example that takes these complications into account.

Let’s say Linda is your client. Her husband Paul passed away when she was 60. Let’s assume that Paul had a PIA of $2,000. The Widow Benefit Linda could receive is based both on when Paul claimed and when Linda decides to claim that benefit. So let’s look at a variety of scenarios to illustrate how Linda’s widow benefit will be affected. Figure 2 illustrates. 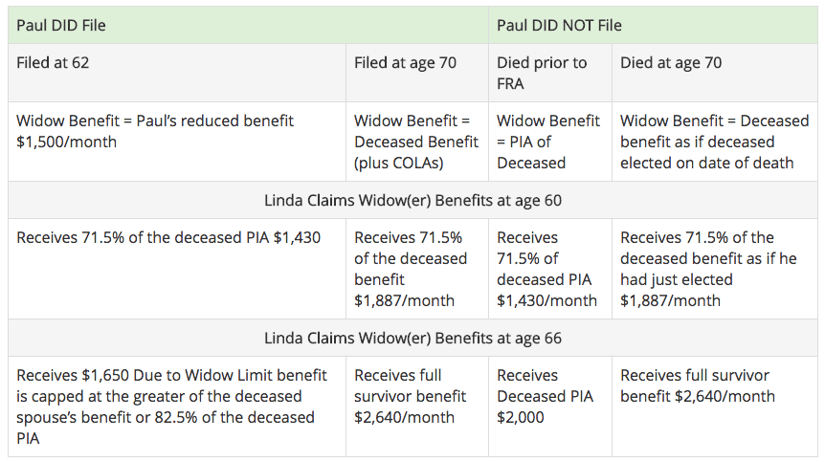 It is of critical importance to understand that no Switch Strategies will be allowed unless the Widow(er) restricts the scope of the initial application.

The ability to run these calculations and find the best possible election strategy is obviously incredibly important to your widowed clients when developing Social Security planning. These scenarios could also be enlightening for your married clients to show what electing early can do to survivor benefits.

Timing one spouse's benefit when the other already claimed
Read