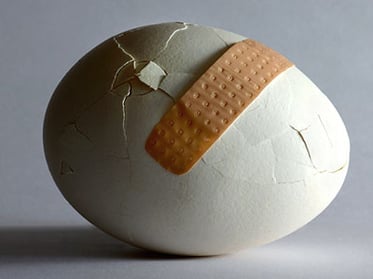 We’ve all seen break-even calculators that show the exact age at which you can expect your decision to delay Social Security to pay off.

For a single person, this framework isn’t awful, but for a married couple, the breakeven framework is dangerously misleading because it necessarily makes one assumption that will almost never hold true in real life—that both members of the couple will die in the same month. Here’s a common method of doing break-even analysis.

How can we be sure the poor assumption of simultaneous death is present in the above breakeven analyses? Simple – If the breakeven accounted for varying ages of death, the result could not be represented as a line, and the ages (in the far left column) could not simply be incremented by one.

So how do you, as an advisor, answer early-death-related questions such as: What if I die early? What if my wife dies early? What if only one of us lives a long time? Perhaps more important than the questions that are asked are the ones that are unasked – those situations where the client recognizes that what you have shown them does not really answer the question and maybe you as an advisor just don’t understand the issue. Oops. That can cost you a client.

Planning for an Uncertain Time Horizon

Because the consequences of planning for too short a time horizon are so catastrophic (i.e. running out of money), and the positive impacts of delaying Social Security under long life expectancies are so substantial, most Social Security planning solutions err on the side of caution by suggesting the advisor or client use longer life expectancies. Social Security Timing® makes the same suggestion. However, we believe it is important for the advisor to use this “optimal” strategy as a baseline—a yardstick against which alternate strategies can be compared and then integrated into the client’s overall financial plan. This is why the “scenario tool” has been an important part of Social Security Timing®’s software since the day we launched.

Our user interface for Social Security Timing® includes what we believe is the only appropriate way to demonstrate a break-even for a married couple because it demonstrates which strategy would be best under which combinations of death ages.

The logic behind the strategy comparison chart is simple: Given up to four strategies, at which combinations of death ages would each be optimal? You can see in the chart above that “Earliest” rarely makes sense when compared to the “Best” that the software identifies. The “Best” strategy hedges the longevity of both members of the couple very well, and the chart better answers the what-if questions that you may be asked than the popular but flawed straight-line breakeven.

But how does the recommended strategy stack up against other strategies that might fit the client’s cashflow needs better? Occasionally, you will encounter a situation where executing the “Optimal” strategy leaves the client with little to no liquid wealth after the fact. In those situations, it can make sense to identify alternatives that may preserve some flexibility for the client, without giving up the survivor benefits. Here is an example that “costs less” in near term asset spend, but hedges the longevity of either spouse (but not both).

Hopefully, you can see that this illustration much better answers the what-if questions that clients regularly ask. With Social Security Timing’s® Strategy Comparison graph, slider interface, filters, and touch to compare technology, you help your clients make this incredibly important decision.

FinPlan Friday: Debt in Down Markets
Read
See All Articles