Why claiming strategies are not ‘gaming the system’ 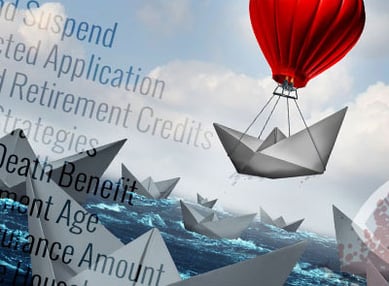 Social Security turned 80 this year, and as you might expect, it has generated a lot of press — some good, some bad, and some just off the wall.

At times, it may feel like you need storm gear to protect yourself from the barrage.

I would like to focus today on the issue of “loopholes.” A recent MarketWatch article’s headline went so far as to say, “Let’s close down Social Security gaming.” One of the first things that we need to understand as advisors is that claiming strategies recommended for clients do not constitute “gaming” the system in any way, shape or form.

The Senior Citizens Freedom to Work Act (Public Law 106-182) was signed into law on April 7, 2000. One of the primary provisions of the law enables a “retired worker to earn a delayed retirement credit for any month for which the retired worker requests that benefits not be paid even though he/she is already on the benefit rolls.” This allows for the voluntary suspension of benefits provision that also then enables a spouse to claim benefits. Interestingly enough, the same author who suggests that Congress should now take away the "gaming" provision of the law, took advantage of it when she claimed her own retirement benefits.

That author and other critics also assert in various articles that the claiming strategies we suggest end up benefiting men and “address no public policy objective.”

In citing the reason why these strategies should be removed, the author of the 2014 MarketWatch article writes: “But it turns out that those most likely to take advantage of ‘claim now, claim more later’ are the husbands in two-earner couples. The reason stems from the fact that married women will generally maximize the couple’s lifetime benefits by claiming early.”

Follow the logic. The low-earner wife files early, then the higher-earner husband can collect a spousal benefit while earning delayed retirement credits on his own account. The husband will have a higher retirement benefit at the time he ultimately files. The writer goes on in a 2015 MarketWatch article to state: “The husband is then free to continue working and receive delayed retirement credits, which increases not only his monthly benefit but also his wife’s.”

While the critics see no public policy objective being met by this strategy, consider the effect of survivor benefits.

It is no secret that women, especially over the age of 85, constitute a majority of Social Security claimants. It is also no secret, according to a study released by the Federal Reserve in 2012, that men in dual income households “are very responsive to their own benefit incentives, but they are not responsive to the incentives created by dependent benefits. This failure to respond to spousal and survivor incentives can significantly reduce wives’ lifetime Social Security benefits.”

Helping these surviving spouses maximize their Social Security income has social value — it is not “gaming the system.” None of the other strategies that we teach in The School involve “gaming” the Social Security system either. Developing a sound retirement income plan means maximizing household income, especially for survivors. The statistics show that the number of men claiming benefits at age 70 has only increased slightly over the past 20 years, rising from approximately 1% to 1.5% of all claimants. In other words, not enough people understand how using claiming strategies can help their retirement plan. Imagine the potential impact on your practice if more did.

The message? You’re not gaming the system. You’re helping middle-income Americans and especially surviving spouses get the retirement income that they’ve earned, that they deserve and that the law allows. Once the public is aware of the value of claiming strategies, demand for your service grows.

If you would like to be able to spot issues and errors that appear in news reports, register for The School online to take your training to a higher level.