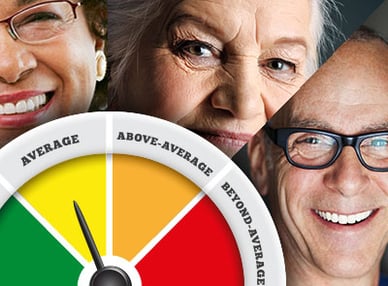 When an individual or a couple decides how and when to claim their Social Security benefits, life expectancy is one of the foundational factors that must be considered.

Americans are living longer, and nearly half of them claim their retirement benefits as early as possible. Nearly all of the remainder claim their benefits prior to their full retirement age.

Unfortunately, the early claiming of Social Security benefits in the face of increased longevity may create financial hardship that will extend far into the future.

The numbers in red represent the percentage increase during the 10-year period from 2000 to 2010, while the second set of numbers (in black) show the increase over the entire 14-year period of time.

Because of the scale of the chart, the phenomenal increase in the over-95 age group does not appear as pronounced as it actually is.

These statistics point out how vital it is for your clients to approach retirement with reasonable expectations as to their longevity as well as their projected sources of income. A 30-year or longer retirement plan can be upset by many factors, as we’ve already observed with the Great Recession’s aftermath on clients’ retirement plans.

The SSA is in the unique position of being able to analyze not only data relative to retirement but also how that data correlates to life expectancy. Generally, we know from various sources that more affluent claimants who have had better access to health care have longer life expectancies. A recent SSA publication underscores that conclusion and illustrates why it is so important to start the retirement planning process with accurate assumptions.

A Social Security analysis completed in 2007 analyzed life expectancy data from its pool of recipients who turned 65 in 1977 and then in six-year increments through 2006. The analysis was restricted to men who were born from 1912 to 1941.

There are two factors that are important to note. First, the life expectancies shown are actual numbers based on when recipients died.  Secondly, remember that life expectancy is that point at which half of a given group will have died.

After finding these numbers, I ran a test to see just what the SSA.gov life expectancy calculator would show for a baby boomer turning 65 years old in the middle of 2015. That number is 84.4 years.

From this data, we can make two important conclusions. First, your clients may end up living significantly longer than they expect. And secondly, client income levels may also be a predictor of why you will need to suggest longer life expectancies in the creation of a retirement income plan.